Forget the old guide­books on how to conduct foreign policy.

These are times that require that the modes and codes change.

The official introduction of Donald Trump as the leader of the free world further colours a globe that has already fallen under the domination of leaders who as political figures represent an unusual mixture of personal and national interests.

The language of this new type of a leader, elected and self-confi­dent, obstinate and relentless, defiant to checks and balances, has already been on display, thanks to the largely successful efforts of Russian President Vladimir Putin.

Admired by some in Europe, such as Marine Le Pen of France or Geert Wilders of Netherlands, Putin has also been a source of inspiration for Turkey’s Recep Tayyip Erdogan, who copy-pasted Putin’s populistic strategies, with a constantly renewed crisis policy and ceaselessly tough rhetoric towards the West.

Inside the European Union, a similar approach has been enthusiastically adopted by Hungarian Prime Minister Victor Orban, whose xenophobic policies have been spreading like a virus across Slovakia, the Czech Republic and beyond.

Much attention has been also focused on how Erdogan diverted the course of his country towards autocratic rule. This backward shift leaves all the unfulfilled expectations of an extremely diverse society. Unresolved issues and the collapse of the rule of law have shattered Turkey’s accession process with the European Union. It is now on life support, regarded as in a vegetative state.

International human rights organisations and independent observers, many of them experts in law, have compared Turkey’s ruling Justice and Development Party’s (AKP) immense purge of governmental institutions, mass arrests, witch-hunt of dissidents and termination of media free­doms to the playbook of totalitar­ian leaderships in 1930s Europe. Their genuine concerns seemed, for a time, to have found a common ground among the European leaders.

Nothing can be further from the truth. What we see and hear from the influential European capitals is simply an illusion.

“The show goes on,” said a European diplomat, who asked to remain anonymous.

“In fact, Erdogan is the ideal Turkish leader for the EU,” he said.

“He is somebody suited down to the ground for them. With the entire discourse and attitude he has demonstrated in the past four years, he has become the proof of the arguments of all those in power positions in the EU who had kept saying that Turkey does not belong to Europe and never will.

“He has turned himself into a central figure of the clash of civilisations, perceived as imposing a political culture that goes right against the founda­tional spirit of the EU,” the diplomat added. “He is admired discreetly for providing the ultimate argument for Turko­phobes arguing Turkey was never fit to enter the EU.”

“But that EU is no longer,” I insisted, adding that it tolerated a similar type of anti-European leadership within itself, such as in Hungary, Poland or Slovakia. He agreed.

Which brings us to the new modes and codes. 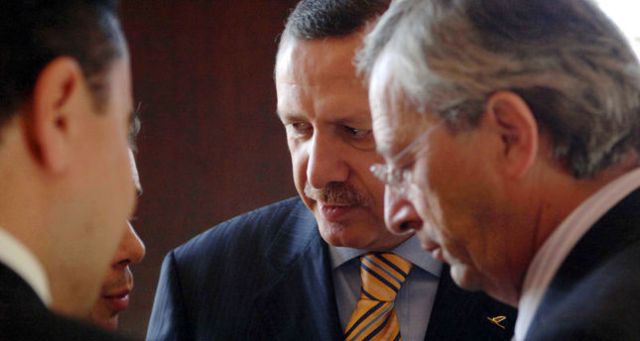 In Erdogan’s case, much boiled down from a European vantage point to keeping the refugee flow to a minimum.

The Turkish president does not disagree. With the help of a refugee deal that went against the European spirit of human values, he played along and helped lower the numbers of people trying to reach the European Union.

Erdogan now goes even further by declaring that most Syrian refugees would be naturalised. There are an estimated 2.7 million of them on Turkish soil. Granting them citizenship means curbing the outflow into the European Union and it sounds like music to the ears of European leaders who feel strained to maximum.

The AKP does its utmost to strip its own citizens, large numbers of those who stand in opposition, such as millions of Kurds, of the right to travel abroad, citing emergency rule. In other words, while he accuses the European Union of closing its gates to Turkey, he is encircling Turkey with barbed wire.

So, we should be left with no illusions. Erdogan has become the helping hand for the European Union to blow out the Turkish candle, a de facto guarantee for where its borders end, drawing the limits for the European conscience. There may even be those who pray in secret that Erdogan stays in power as long as possible.

What matters in the new age is a foreign policy reduced to just trade. As long as there are those to do business — nothing but business — with, forget the rest.

Welcome to the age of new modes and codes.