Turkey’s opposition marches for justice, as its media shakes hands with Erdoğan

With these words, Turkish opposition leader Kemal Kılıçdaroğlu started more than a week ago from Ankara his long ‘March for Justice’. 432 km and 20 days later, he hopes to conclude it in front of a jailhouse in Istanbul. His deepest wish is, naturally, as many discontented voters as possible to follow him all the way.

It is a major event if Turkey’s Secular-Kemalist main opposition had come to the point of ‘enough is enough’. During the rule of the AKP it has remained tame, timid, reluctant, no matter how much out of of power cake Erdoğan has gobbled up.

Till the very last, CHP insisted on a ‘legalism’ which was lef devoid of its meaning in a country where the rule of law entirely had collapsed. 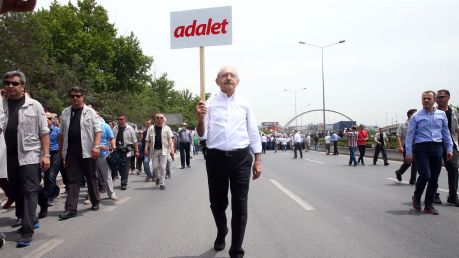 But there is apparently a ‘last drop’ in Turkish reality which pushes even the CHP to the street. Kılıçdaroğlu had refused the calls from the grassroots and the younger flanks of his party earlier, to withdraw from Parliament or, – as it was established by international monitors that the referendum result was highly questionable due to irregularities, – CHP would take to streets.

Now that he had finally decided, there is little surprise that people hesitate whether or not they will be let down – once more.

The ‘last drop’ was the 25-year long prison sentence delivered to my friend and former colleague, Enis Berberoğlu, who is a deputy with the very CHP. More than a year ago, Enis made it public that it was him who had handed some files on secret delivery of arms, allegedly to jihadist groups in Syria, to the editors of daily Cumhuriyet, which led to a spectacular trial of more than 13 top figures of the newspaper. 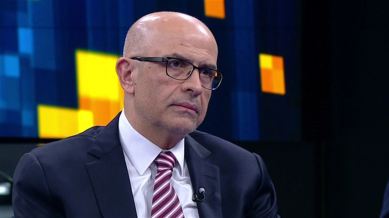 Enis was found ‘guilty’ of ‘obtaining state secrets with the aim of spying’, and, ‘aiding and abetting the so-called ‘Gülenist Terror Organisation – FETO’ without being a member’.

The judge had first ruled a lifetime imprisonment, which he lowered afterwards. The absurdity of the cases related to Cumhuriyet is that it was not the newspaper which broke the story; it was the ultra-nationalist daily Aydinlik – mouthpiece of the tiny Vatan Party (VP) – that had done it – as early as January 21, 2014. No charges were filed to the publication. Aydinlik daily and VP had become staunch supporters of Erdoğan’s ‘scorched earth’ policies against Kurds and massive purges; propogating a break-down of relations with NATO and the West. So, you may say that none of these charges makes sense and you are probably right.

Enis’s case sent huge shockwaves, nevertheless. He was put in jail because he had no longer parliamentary immunity: It was lifted May last year, and the blame CHP leadership was to blame. Because when Erdoğan angrily called for taking down the shield of immunity, citing the pro-Kurdish deputies to be sent to prison, Kılıçdaroğlu had supported his proposal.

‘You are digging your own grave’ shouted CHP’s left flank and outside critics, only in vain.

Well, what’s past is past, and now he marches on Ankara-Istanbul Highway with a placate that says, ‘Justice’, followed by thousands of people. No matter what, it’s a new phase in ‘Turkish nightmare’ reaching new depths every day as we approach the anniversary of a murky coup attempt. It shows that oppositional dynamic of Turkey will not fade quietly; the resistance will go on somehow, somewhere.

Yet the march is a fragile one, because it has shaken, stirred and angered Erdoğan, who first mocked the CHP by saying that ‘justice is not sought on the street’, and then delivered a threat: ‘Do not be surprised if the judiciary invites you somewhere one of these days.’ 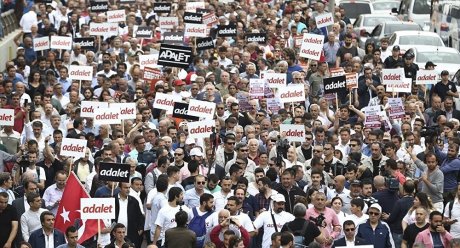 So, no wonder if there is a growing fear of provocations to block the walk.

Each and every tragic or absurd case in Turkish nightmare turns into a litmus test to expose people in key positions and intellectuals where they stand; their existential choices.

Enis’s case has proven to be no exception: As his party leader on his behalf took to the streets, his former boss in media was busy attenting the ‘iftar’ hosted by Erdoğan at his ‘Istanbul Palace’.

Enis and I had been working for daily Cumhuriyet in the dark years following the military coup in 1980. Then we parted to our own ways. Enis was appointed by Aydın Doğan, head of Doğan Media Group, as the Chief Editor of daily Hürriyet in late 2009 and served as such until August 2014, and resigned, citing political pressures.

It was his time of ‘knife’s hit the bone’.

So, it was a chilling moment to see his boss sitting right next to Erdoğan at the huge iftar table, where all the ‘tame and obedient’ media proprietors, editors and columnists – more than a hundred of them – were present. The ‘iftar’, only days after Enis’s jailing, was obviously meant to deliver a new lecture to media on how to ‘behave themselves’. 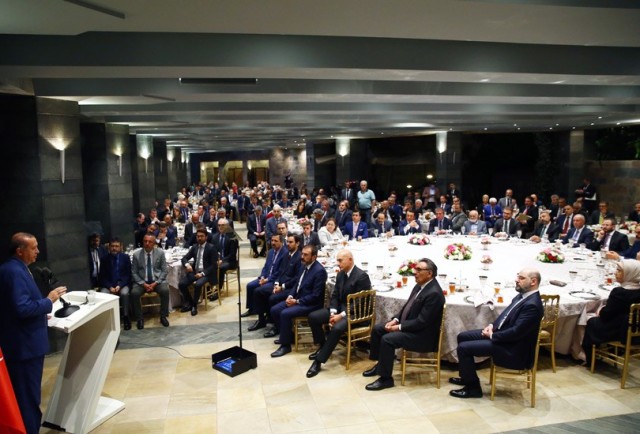 As Doğan and several other media moguls kowtowed, Erdoğan took the floor.

Everybody was all ears.

‘Some western institutions come to us with these chants about journalists in jail” he said. ”They are telling us (me) that there are so and so many journalists in prisons. Look my friends, I am giving you the numbers handed to me by our ministry: Of those 177 who say they are in jail because of journalism, that’s what they say, only two of them are press card holders. One of them is accused of murder; all the rest are in jail because of their relations with terrorist organisations. We say: Are you going to believe the documents and data of our ministries or the lies?”

”To run after news stories and being a tool for treason are two different things. There is no difference between those who make their newspaper pages to the command of terrorist organisations and those who take weapons and climb up to mountains. There will be a price to be paid for taking part in actions against the national security… Do not forget: justice is sought in houses of justice, not on the streets…’

He then went on describing the justice march as a form of terror.

And when he ended his address, nobody dared ask questions.

Instead, they applauded, intensely.

Some media bosses were keen on handing over congratulations, expressing loyalty, as Erdoğan discreetly called for censorship of the March for Justice.

Enis and 177 colleagues were in jail; and their employers and many in the iftar hall who knew the prisoners well did not raise the issue at all.

To the attendees, no issue of Turkey was interesting enough for them to ask Erdoğan. 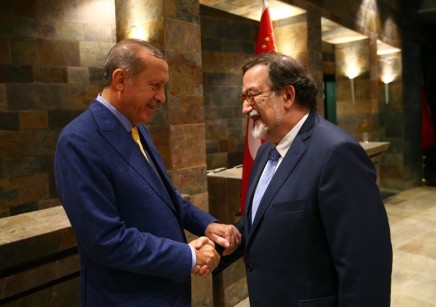 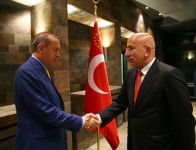 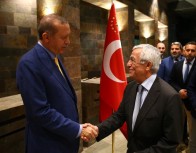 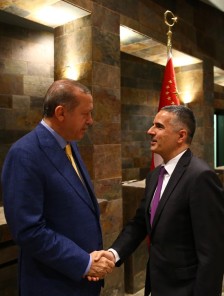 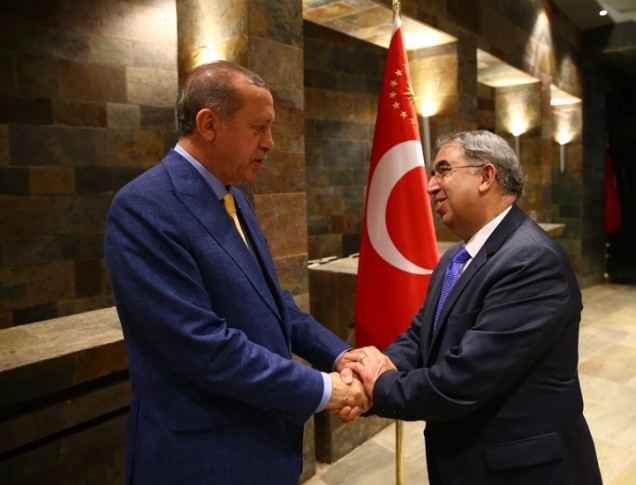 Then, at the end of iftar dinner, there was the routine they had all been waiting for:

Handshakes and photo ops with the President.

All smiles and soft looks in snapshots posted, and immortalised in the website of the Office of Presidency of Turkey.

One of the strongest smiling moments were when Doğan holds Erdoğan’s hand with his both hands, apparently very content.

Enis the journalist was a distant memory at that moment, maybe forgotten. 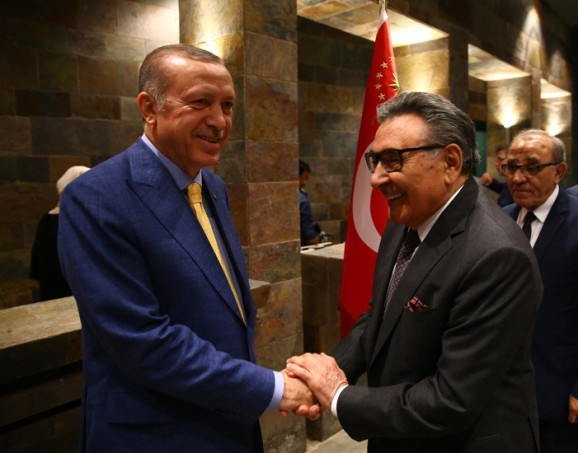 But there was more we learned.

One columnist wrote his impressions from the iftar dinner, unable to hide his surprise, that the number of journalists who prayed had dramatically risen.

‘I was very emotional when I saw that so many from our media world were praying. It gives me joy that some colleagues whom I had never had imagined had also begun to pray’ wrote Kemal Öztürk, a former editor of Anatolian Agency. The crowd that night had lined up to pray behind the chief advisor of the president, Ibrahim Kalın,’ he added.

Another columnist revealed that there was also a dramatic rise among them who grew moustache and beard. He was told that

”His excellency is criticising all those who are without them, that is the reason why we do it..”

But the marching CHP was far more serious than the attending journalists. Party’s deputy chairman, Aykut Erdoğdu, had read the presidential speech and interpreted it as Erdoğan had called Doğan and other media proprietors to ‘give orders’ not to cover the ‘March for Justice’ at all. His tweets made a big splash.

And when a columnist of Doğan the day after called him a ‘slanderer’ because ‘he had talked to his boss and he had said that this was a slander to me and our president.’

Erdoğdu was quick to snap back.

‘When I was on the march for justice, I was told by many journalists that the iftar and speech means just that’ he wrote. ‘To Aydın Doğan: If the president calls you and editors and you all go running, then this is a problem. And if he equates the march to terror this means: do not write anything about it!’

A senior journalist, Nazım Alpman, was watching CNNTürk TV – a Doğan group outlet – the day after the iftar.

”I watched the 7 pm main news from beginning to end. According to this channel, leader of the main opposition party does not march for justice on the roads. And (jailed journalists) Nazlı Ilıcak, Ahmet Altan and Mehmet Altan did not appear at court at all!’

Yavuz Baydar has been an award-winning Turkish journalist, whose professional activity spans nearly four decades. In December 2013, Baydar co-founded the independent media platform, P24, Punto24, to monitor the media sector of Turkey, as well as organizing surveys, and training workshops. Baydar wrote opinion columns, in Turkish, liberal daily Ozgur Dusunce and news site Haberdar, and in English, daily Today's Zaman, on domestic and foreign policy issues related to Turkey, and media matters, until all had to cease publications due to growing political oppression. Currently, he writes regular chronicles for Die Süddeutsche Zeitung, and opinion columns for the Arab Weekly, as well as analysis for Index on Censorship. Baydar blogs with the Huffington Post, sharing his his analysis and views on Turkish politics, the Middle East, Balkans, Europe, U.S-Turkish relations, human rights, free speech, press freedom, history, etc. His opinion articles appeared at the New York Times, the Guardian, El Pais, Svenska Dagbladet, and Al Jazeera English online. Turkey’s first news ombudsman, beginning at Milliyet daily in 1999, Baydar worked in the same role as reader representative until 2014. His work included reader complaints with content, and commentary on media ethics. Working in a tough professional climate had its costs: he was twice forced to leave his job, after his self-critical columns on journalistic flaws and fabricated news stories. Baydar worked as producer and news presenter in Swedish Radio &TV Corp. (SR) Stockholm, Sweden between 1979-1991; as correspondent for Scandinavia and Baltics for Turkish daily Cumhuriyet between 1980-1992, and the BBC World Service, in early 1990's. Returning to Turkey in 1994, he worked as reporter and ediytor for various outlets in print, as well as hosting debate porogrammes in public and private TV channels. Baydar studied informatics, cybernetics and, later, had his journalism ediucatiob in the University of Stockholm. Baydar served as president of the U.S. based International Organizaton of News Ombudsmen (ONO) in 2003. He was a Knight-Wallace Fellow at University of Michigan in 2004. Baydar was given the Special Award of the European Press Prize (EPP), for 'excellence in journalism', along with the Guardian and Der Spiegel in 2014. He won the Umbria Journalism Award in March 2014 and Caravella/Mare Nostrum Prize in 2015; both in Italy. Baydar completed an extensive research on self-censorship, corruption in media, and growing threats over journalism in Turkey as a Shorenstein Fellow at the Kennedy School of Government at Harvard.
View all posts by yavuzbaydar →
This entry was posted in AKP, Erdogan, Gülen, Media, Politics, Turkey. Bookmark the permalink.

1 Response to Turkey’s opposition marches for justice, as its media shakes hands with Erdoğan