Turkey’s ‘fake-coup’? – the truth which demands to be digged and investigated

The botched coup in Turkey last July is wrapped in such mystery that it begs for a constant return for updates and further analysis.

I wrote numerous articles about it, given on avaliable data. The more we have been exposed to, the more suspicious we have become about the motive, the composition, choreography, and the involvement of the actors in the act of mutiny.

The government, its mouthpiece media and even some so-called secular-oppositional pundits in Turkey were heavily engaged in presenting the world the official version that the coup was the sole product of the Gülenists. The harder it was tried, the lack of concrete evidence has become more exposed, and nowadays the frustration is apparent that the ‘world does not believe in our story so we have to do something about it.’

But the efforts does not change the fact that this story has a high number of key questions that remain unanswered. The secular and Kurdish opposition parties keep insisting about a controlled coup, and the current situation even brought forward a term ‘fake coup’. 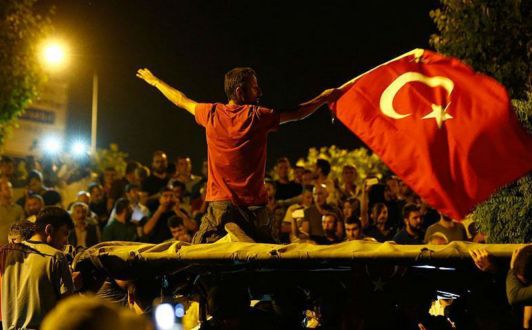 ”Some even call it a “false-coup,” which President Recep Tayyip Erdogan organized in order to justify a crackdown against oppositionists” argues David L Phillips, in an article which justifies outmost attention. (Phillips is Director of the Program on Peace-building and Rights at Columbia University’s Institute for the Study of Human Rights. He worked on Turkish issues as a senior adviser and foreign affairs expert to the U.S. State Department’s Bureau of European Affairs under President Clinton and Bush. His recent book is titled An Uncertain Ally: Turkey Under Erdogan’s Dictatorship.)

Here are the key points in his article:

”Case studies suggest a pattern, which can be used to evaluate the events in Turkey one year ago.

Public information is critical. The putschists typically seize control of media so they can manage the flow of information to the public. Traditional media outlets involve radio and television, both public and private. New media include social media such as Twitter, Facebook, and YouTube.

A head of the putsch presents himself so the public can attach a face to the events and find reassurance. If the public protests the coup, mutinous soldiers use all necessary measures to preserve order.

The following occurred in Turkey.

Erdogan was vacationing in Marmaris on July 15. When mutinous soldiers arrived at his hotel to arrest him, Erdogan had checked out and was on his way to Dalaman aiport.

The first inkling of the coup occurred in the early evening when mechanized units used tanks to block the Bosphorus Bridge and the Fatih Sultan Mehmet Bridge, crossing from the Asian side to the European side of Istanbul. Land forces on the bridge were joined by the gendarmerie.

Erdogan disappeared during the coup.

In the early hours of the morning, he surfaced to address the nation using FaceTime. He called on followers to take to the streets in defense of Turkey’s democracy.

Imams echoed Erdogan’s appeal. The chant “Allahu akbar” – God is great – reverberated from the muezzins of mosques. Many thousands of supporters went to Ataturk Airport and Taksim Square in Istanbul. They also gathered outside the presidential palace in Ankara.

Though Turkey’s military has a reputation for efficiency, its actions were poorly considered and badly executed. The coup fell far short of best practices for military takeovers.

How could mutinous soldiers have been unaware of Erdogan’s plans to leave the hotel? Failing to find him was a major gaff that undermined the coup from the outset.

Why wasn’t Erdogan apprehended on his way to the airport before his presidential plane took off? The coup plotters possessed F-16 fighter jets. Why didn’t they intercept or shoot down Erdogan’s plane?

Members of the Turkish General Staff representing major branches of the Turkish armed forces were detained. Was their arrest part of the coup design or was it intended to prevent them from joining the ranks of mutineers?

MIT’s Hakan Fidan, was not apprehended. Of all the members of Turkey’s national security establishment, Fidan is closest to Erdogan and best positioned to protect the president. Erdogan once called him his “sır küpü,” which means ‘jar of secrets’.

The putschists never presented themselves to the public, explaining events and offering reassurance.

Why did the coup plotters fail to take over major private networks that most Turks actually watch? Both TRT and CNN Turk have relatively small viewing audiences.

And why did the coup plotters allow social media to function? They could have jammed coverage, but didn’t. It is ironic that Erdogan addressed the nation using FaceTime, a form of social media he vowed to eliminate.

While imams called Erdogan’s supporters to the streets, the putschists issued instructions for people to stay indoors. Allowing Erdogan supporters free reign allowed a groundswell of popular support for the president.

Damage to the TGNA (Turkish Parliament) was minimal. Crater analysis suggested that explosives inside the building were used, rather than high impact ordinance of fighter jets.

According to US Secretary of State John Kerry, “It does not appear to be a very brilliantly planned or executed event.” Kerry has a knack for understatement. It was a botched coup that showed all the hallmarks of incompetence.

Would Erdogan be so reckless to stage an event that endangered Turkish citizens, killing 265 people? Another theory exists about Erdogan’s complicity.

Rather than organize the coup, Erdogan was either tipped off by members of the putsch or by the intelligence agency of a foreign government. Instead of preventing the coup, Erdogan allowed events to progress just far enough so claims of a coup were credible but not so far as to present any real risk.

In his first public remarks during the early morning of July 16, Erdogan issued a chilling threat: “This latest action is an act of treason. This attempt, this move, is a great gift from God for us. Why? Because the move will allow us to clean up the armed forces, which needs to be completely cleaned.” In a rush to judgement, he vowed to purge all state institutions of “the virus” spread by supporters of Fethullah Gulen.

The Turkish government had already prepared lists of oppositionists. The authorities moved immediately to arrest them. To date, about 50,000 security officers and civil servants have been arrested and another 150,000 dismissed from their jobs.

Approximately 150 journalists are in jail. Members of parliament, judges, and educators have also been dismissed or arrested. Instead of reconciliation, Erdogan arrested another 7,000 people on the one-year anniversary. Erdogan vows to approve a bill reinstating the death penalty if parliament proposed it.

Some say Erdogan is paranoid.

But even paranoid people have enemies.

Erdogan was profoundly aware of potential challenges from the TSK. Turkey has a history of military coups in 1960, 1971, 1980, and 1997. Erdogan was directly affected by the coup of 1997, which outlawed the Refah Party to which he belonged.

Events in Egypt further exacerbated Erdogan’s concerns. Erdogan identified closely with Egypt’s President Mohamed Morsi as a kindred spirit and fraternal political ally. Morsi was a leader of the Muslim Brotherhood and a known Islamist. When Morsi was overthrown by General Abdel Fattah el-Sisi in 2013, Erdogan feared something similar. He accused the West of masterminding Morsi’s removal.

Erdogan was pro-active to prevent a similar fate. Erdogan’s purge is called a “civilian coup” or a “controlled coup,” because it pervasively eliminated opposition and generated widespread fear in society and professional ranks. An open-ended state of emergency has been used by Erdogan to eliminate the rule of law and systematize repression.

Secrets are hard to keep. Repression is difficult to maintain. Close to two million people rallied in the Maltepe district of Istanbul on July 8. They demand “adalet” ― justice and the rule of law. They want answers.

When Erdogan eventually leaves power, Turks and the world will learn what really happened.

The truth will come out.

It may, or not. But the facts are clear: 167 generals of the Turkish army are in detention. This is 46 % of the top brass of the second largest army of NATO. We know that only 1.5 % of the army took part of the coup. If these generals were all involved in the coup, how come more soldiers and troops were not on the streets on that night?

Out of hundreds more.

Now, President Erdoğan is approaching another breaking moment of history. In early August next month, he will chair the traditional and critical Supreme Military Council meeting, during which all the key appointments and dismissals are decided. Reports suggests another massive purge which will finalize the restructuring of the Turkish army whose command will be designed as to serve the ruling AKP’s pure political interests; and no longer of Turkey’s.

Questions remain. As long as we can’t find answers, we will not be able to write history as it happens.